Three varieties of the cacao plant exist in the world. The Criollo (native): a low yielding variety, representing only 5% of the world production, considered as the finest due to its delicate and fruity aroma. The Forastero (foreign): a more resistant and productive variety, amounting to more than 80% of the world production, generally considered as an ordinary quality cacao. The Trinitario (named after its native island of Trinidad), is a hybrid of the other two varieties, resistant like the Forastero and more complex in flavor, like the Criollo.

Most of the cacao grown in Dominican Republic is Trinitario, however the farmers produce two different grades of beans: Sanchez and Hispaniola.
​Sanchez beans, named after the port of Sanchez from where it was originally exported, are dried immediately after harvesting. Historically, these were the most exported type of bean, and they acquired a poor reputation on international markets. Today, they are mostly exported to the USA to be used in cocoa butter or confectionery chocolate.
Hispaniola beans are fermented for 3 to 7 days before being sun dried. This fermentation stage allows for subtle flavors to develop, making these beans sought after for fine and craft chocolate making.

All cacao in Dominican Republic is shade-grown, under the leaves of citrus, banana and avocado trees. Almost 10% of the forested area in the country is planted with cacao trees. 60% of the national production comes from the Northeastern region, especially around San Francisco de Macoris. The rest of the production is divided between the Eastern, Central and Northern regions.

Much like in the rest of the world, cocoa is grown mostly by smallholders, and by owners of medium or large plots of land, rather than on large commercial plantations.

​Cacao grown in Dominican Republic will typically have a slight acidity and yellow fruit notes, but flavors profiles vary depending on the region of the cacao.  The Eastern and Central region produce a more bitter cacao for instance. 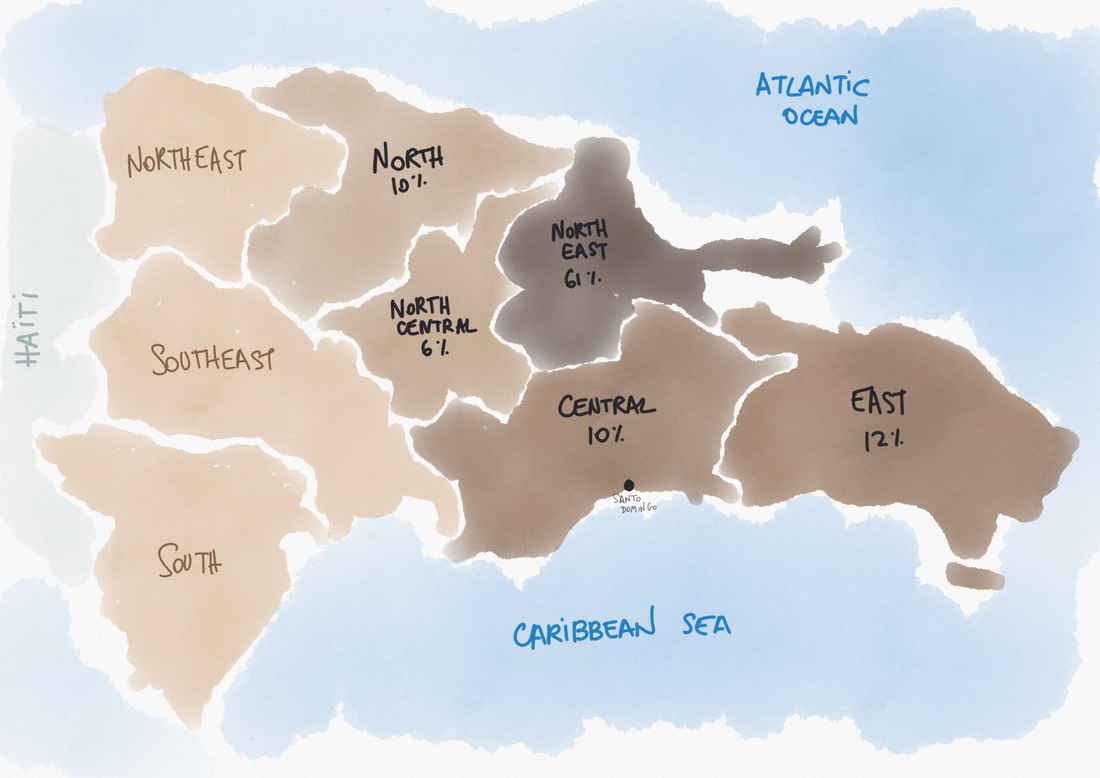 Cacao was first introduced in the island of Hispaniola (the current Dominican Republic and Haiti) by the Spaniards in the beginning of 1600, mostly as an experiment.  The French contributed to the development of its culture from 1665, with the introduction of more plants and species.
​An industrialized smallholder culture of cocoa started emerging in the 1880s, following the rise of the international demand and as an alternative crop to tobacco, which was experiencing price declines.

Until the late 1980s / early 1990s, Dominican cacao had a reputation of poor quality on international markets, due to the absence of fermentation and inadequate drying (specific to the Sanchez quality grade). The Hispaniola beans were developed from that moment under the impulsion of the German development organization GTZ, who recognized the potential of Dominican cacao. Working hand in hand with producers grouped in the Conacado organization, they strived to introduce an adequate fermentation process. The quality of the cacao improved greatly, and with it, its price on international markets.
​
In 2017, the country produced 86,600 tons of cacao beans, amounting to 1.7% of the world production and ranking at 9th place, behind Ivory Coast, Ghana, Indonesia, Nigeria, Cameroon, Brazil, Ecuador and Peru. Today, the Dominican Republic is the first exporter of organic cacao and the second in Fairtrade certified cacao globally.